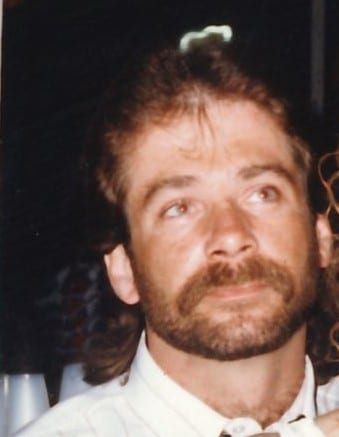 Jeffrey Allan Jamieson
December 24, 1961 - June 22, 2020
Print
Email
Jeffrey Allan Jamieson, age 58, of Michigan City, IN passed away at his home on Monday, June
22, 2020. He was born December 24, 1961 in Kalamazoo, MI to Margaret (McNally) Jamieson
who preceded him in death. He is also preceded in death by his wife Theresa.
Jeffrey is survived by his children: Jeff (Sarah) Jamieson, Justin (Karen) Jamieson, Shannon
(Joey) Evans, Terry Jamieson and Gregory Jamieson; grandchildren: Piper, Patrick, Rylan, Lily, Leila, Leona, Kylie and Ray.
Jeffrey served his country for 12 years in the U. S. Navy as a gunner’s mate on the USS Nimitz.
He leaves behind his beloved dog Grace who often accompanied him on driving trips.
Arrangements are being handled by Geisen-Carlisle Funeral Home, 613 Washington St.
Michigan City, IN 46360.
To sign guestbook or leave condolences, please visit: www.Carlislefh.com or call (219) 874-4214.

To leave a condolence, you can first sign into Facebook or fill out the below form with your name and email. [fbl_login_button redirect="https://www.geisenfuneralhome.com/obituary/jeffrey-allan-jamieson/?modal=light-candle" hide_if_logged="" size="medium" type="login_with" show_face="true"]
×