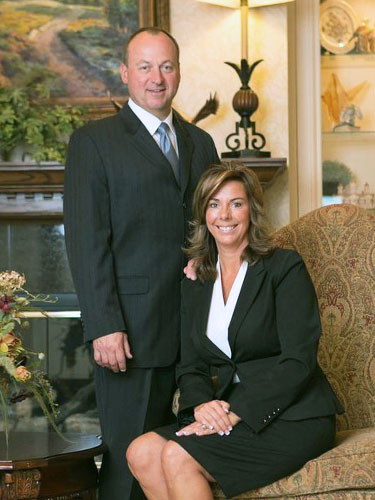 Larry Geisen:
Our owner has been a licensed funeral director since 1990, after graduating from Worsham College of Mortuary Science in Chicago, Illinois. He also has a B.S. in Business from the Krannert School of Business at Purdue University in West Lafayette, Indiana. The son of Robert and Marilyn Geisen, Larry represents the fifth generation of the Geisen family to serve as a funeral director at Geisen Funeral Homes.

Born and raised in Crown Point, he graduated from Crown Point High School, where he was active in sports and vice president of the student council. He has been married to his high school sweetheart, Kim, since 1990. Together, they have three children: Alle and Anthony — both graduates of Purdue University — and Nick, who is attending Butler University. Larry and Kim also have a beloved Cocker Spaniel named Ralphy. When he’s not serving families at the funeral home, Larry enjoys golfing, boating, wake surfing and going to the YMCA. When his children were younger, he spent most of his spare time coaching them in all their sports. One of his fondest memories is helping coach the 2013 Cal Ripken Baseball World Series Championship team, which his son, Nick, was a part of.