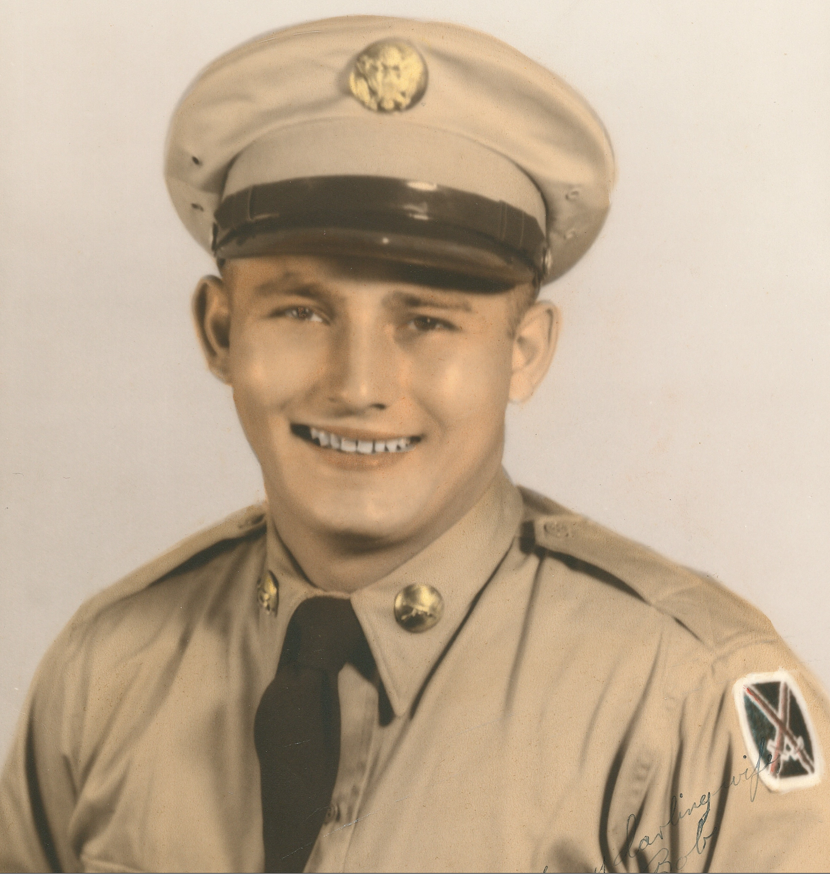 Robert graduated from Tolleston High School in Gary, Indiana in 1947. While attending Tolleston, he was a ROTC member and he played football, basketball, baseball, and track.
Robert met Amelita (Amy) Dobis, the love of his life, in Chicago Heights, Illinois. They were married on April 14, 1951. They raised their four children in Merrillville, Indiana relocating for their retirement years to Crown Point, Indiana.
Robert was drafted and served as a sergeant in the army during the Korean Conflict from 1951 – 1953. He was CBR trained to identify if any chemical, biological, or radiology warfare was being used against the U.S. He was at White Sands, New Mexico when the atomic bomb was detonated ½ miles from his fox hole. He went in with other men with Geiger counters to make sure it was safe.

Robert was a retired self-employed independent contractor for various businesses in Gary, Merrillville, and in Illinois. He installed carpet and tile and in later years also worked at Gary National Bank (Gainer Bank, Chase Bank) overseeing the repairs for carpet and tile that were needed at all the bank branches.

Robert was a proud member of various civic organizations: American Legion Post #430 in Merrillville, Indiana, Gary Sportsman Club, which he joined in 1950 where he was the oldest continual member in years, Mason organization for 60 plus years in Blue Lodge, South Bend Scottish Rite and Shriners Children’s Hospital. While in his retirement years, he drove patients for Shriners Hospital to Chicago and Cincinnati for 18 years. He was also an usher at the Shriners Children’s Hospital in Chicago. He also was a member of the Independent Order of Foresters for over 50 years and the Eagles.

He was on bowling teams in his younger years and loved caring for his flowers and garden when his family lived in Merrillville. He got the “gambling” bug when he began to accompany his wife, Amy, on gambling trips. He continued to visit the casinos after her death.
Bob was resilient. We comically said that he had “nine lives.” He survived many medical episodes that many thought he would not live through. At each turn, he fought and won. But eventually, his enormous heart couldn’t keep fighting.

We will forever be grateful to the loving staff and doctors that took great care to ensure a peaceful transition to his next life, where he is finally reunited with his beautiful wife, Amy, who was the love of his life. There is a beautiful reunion happening in Heaven right now because dad is with our mom now. We know that our dad and mom are in each other’s arms again.

Friends may visit with the family on Sunday, August 14, 2022 from 4:00 PM to 7:00 PM at Geisen – Pruzin Funeral Home, 6360 Broadway, Merrillville, IN. A Masonic prayer service will be offered at 6:00 PM. The funeral service will be held at the funeral home on Monday, August 15, 2022 at 10:00 AM with interment at Calumet Park Cemetery in Merrillville immediately after.

In recognition of his love for children, in lieu of flowers, please consider donating to the following organizations that can improve the lives of children in need with medical conditions, Shriners Children’s Hospital in Chicago, St. Jude’s Hospital, or any children’s hospital of your choice.

To leave a condolence, you can first sign into Facebook or fill out the below form with your name and email. [fbl_login_button redirect="https://www.geisenfuneralhome.com/obituary/robert-w-dobis/?modal=light-candle" hide_if_logged="" size="medium" type="login_with" show_face="true"]
×