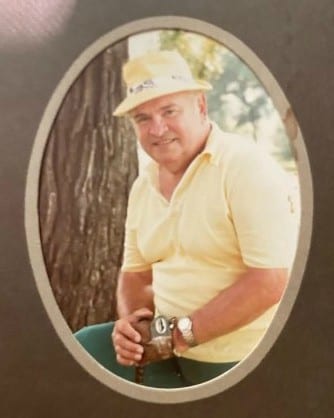 Paul was born and raised in Gary, IN where he attended school at St. Mark’s, Lew Wallace, and Horace Mann; and Purdue and Indiana Universities. He served in WWII (1943-1945) in the US Marines and assigned to Pacific Air Command at Marimac Air Depot, then to Headquarters, Washington, DC.

Paul married Mary Agnes O’Connor in 1950 and they were the first couple chosen to be wed in the then, newly built, Holy Angels Cathedral. Their marriage lasted 49 years, during which time two sons, Tom and Jim, were born. Paul received, in 1969, from the then Indiana Governor, Edgar Whitcomb, the Sagamore of the Wabash Award at a dinner held in the Governor’s Mansion in Indianapolis.

He retired from US Steel in 1978 as Assistant Comptroller of their regional Chicago office. Paul was then employed as Manager of Accounting for the Anderson Company, which was acquired during his tenure by Champion Spark Plug Co., followed by it’s acquisition by Cooper Industries.

Private Family Services have been entrusted to Geisen Funeral, Cremation & Reception Centre in Crown Point, IN. Paul will be laid to rest at Calumet Park Cemetery in Merrillville, IN.

To leave a condolence, you can first sign into Facebook or fill out the below form with your name and email. [fbl_login_button redirect="https://www.geisenfuneralhome.com/obituary/paul-a-conde-jr/?modal=light-candle" hide_if_logged="" size="medium" type="login_with" show_face="true"]
×